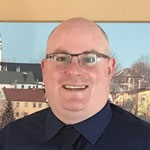 "The technology he has in his room is incredible. … There is always so much going on and he keeps adding more and more. I love how he creates a project mission with us and lets us choose how we accomplish that mission."
— Student

Benjamin focuses on empathy and global competencies in his many courses and extracurricular activities, while creatively supporting students' STEM mastery. With his catchphrase, "The world has enough flashlight apps," he encourages students to develop real solutions to real problems.