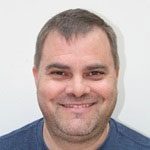 "Mr. Dueck is an exceptional educator. He is innovative in his teaching practices, always willing to go the extra mile for a student, and has improved the lives of every student that walks through his door. His impact on students lasts a lifetime."
— Former student

Kelvin Dueck's interest in engaging his students in science and math knows few bounds. Once, he went so far as to jump out of a plane, on a dare from a student, while teaching a physics lesson about free fall. This legendary performance is available on YouTube.

With his motto, "Mistakes are expected, respected, inspected and corrected," Kelvin helps students learn how to learn. Rather than encouraging students to call on mindlessly memorized mindless equations to solve problems, he teaches them how to derive the physics involved for themselves.